Newport, Oregon- Lincoln County Community Right’s Petition of Review regarding a voter adopted ban on harmful aerial spray of pesticides has been denied by the Oregon Supreme Court. In 2017, Lincoln County voters passed Measure 21-177, banning aerial pesticide spraying in the county to protect the health and safety of people and ecosystems. Fronts for the timber and chemical industry promptly filed a lawsuit to overturn the people’s ban. The ban stood and the county enjoyed freedom from chemical trespass for 29 months, until Lincoln County Circuit Court ruled the measure invalid in September, 2019 citing state law(promoted by the American Legislative Exchange Council, aka ALEC), as over-riding local law even though the local law was more protective of public health and the environment. That ruling was upheld by the appellate court.

Carol Van Strum, author of A Bitter Fog: Herbicides and Human Rights, stated, “Existing environmental laws have done nothing; they’ve literally allowed the poisoning to go ahead.” Aerial spraying of toxic pesticides has been resumed over Lincoln County industrial timber lands in coastal watersheds. The effect that these poisons have on the water supply is documented.

The Oregon Supreme Court was petitioned to hear our aerial spray ban case, as it has far-reaching impacts on citizens of Oregon and beyond. We had asked for consideration of three questions for rulings:

Lincoln County Community Rights submitted documentation supporting the merits of the case and answering the court’s own criteria for “importance.” The merits included challenging a broad array of preemption laws suppressing benefits to the people of Oregon, such as minimum wage raises by cities, plastic bag bans, workers benefits. We called on the justices of the Oregon Supreme Court to put limits on State preemption laws. These laws, often written by corporate interests such as ALEC, overrule local laws to protect health and safety. Oregon Supreme Court Justices denied the people of Lincoln County access to be heard.

“The voters of this county have been denied their day in court, this denial essentially expressing that the will of the majority of voters in this election is unimportant. Democracy has not been served nor is justice possible in this system where state and corporate interests are one, and peoples’ rights and the well-being of the people is disregarded,” commented Lincoln County Community Rights board member Debra Fant.

Lincoln County Community Rights is a public benefit organization that seeks to educate and empower people to exercise their right of local democracy in matters that pertain to their fundamental rights, natural environment, quality of life, health and their safety. Given the harm that people and ecosystems suffer from the practice of aerial spraying of industrial forest land with pesticides, the group drafted an ordinance to ban aerial pesticide spraying in Lincoln County, Oregon. Measure 21-177 was adopted by voters in May 2017, making Lincoln County the first county in the United States to ban aerial pesticide spraying through the vote of the people. www.lincolncountycommunityrights.org

To read more find these articles:

THE PEOPLE vs. AGENT ORANGE-Hollywood, Portland

The Agent Orange catastrophe did not end with the Vietnam War. Today, the world over, a primary chemical of the toxic defoliant controls weeds in farming, forestry, parks, playgrounds… It wreaks havoc on the human genome, causing deformed births and deadly cancers.

After decades of struggle and tragic personal losses, two heroic women are leading a worldwide movement to end the plague and hold the manufacturers accountable. In France, Tran To Nga is suing the American chemical industry for poisoning her in Vietnam. In Oregon’s Carol Van Strum exposes the continuing use of toxic herbicides.

Incriminating documents disappear.  Activists are threatened.  A helicopter technician secretly films the contamination of reservoirs, while a massive industrial cover-up goes on. 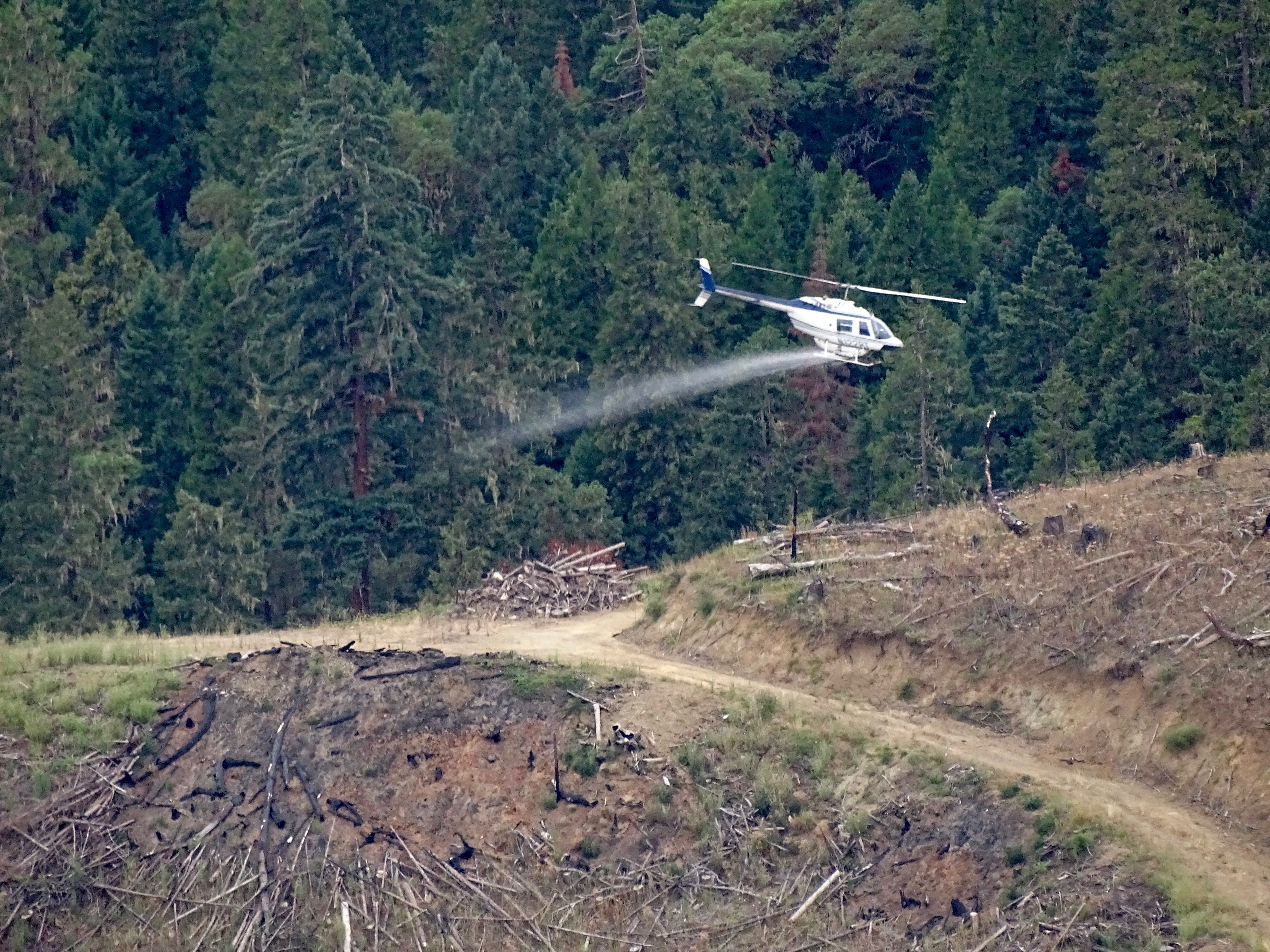 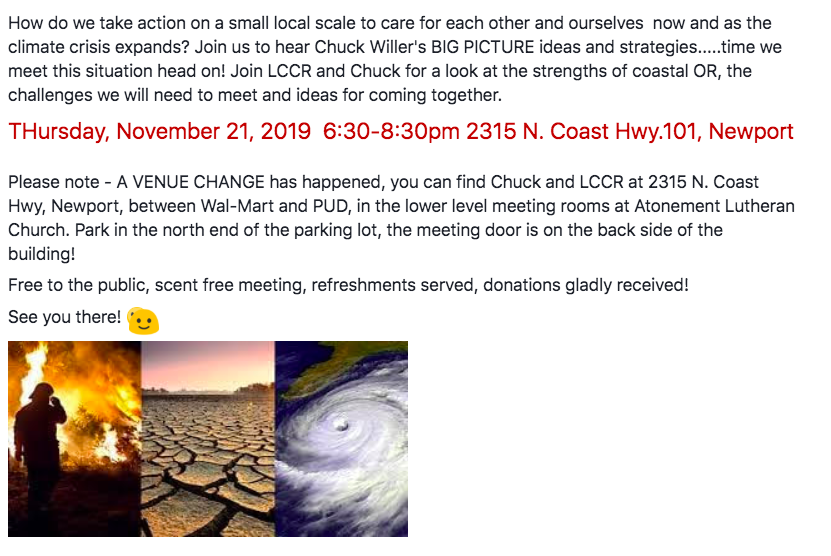 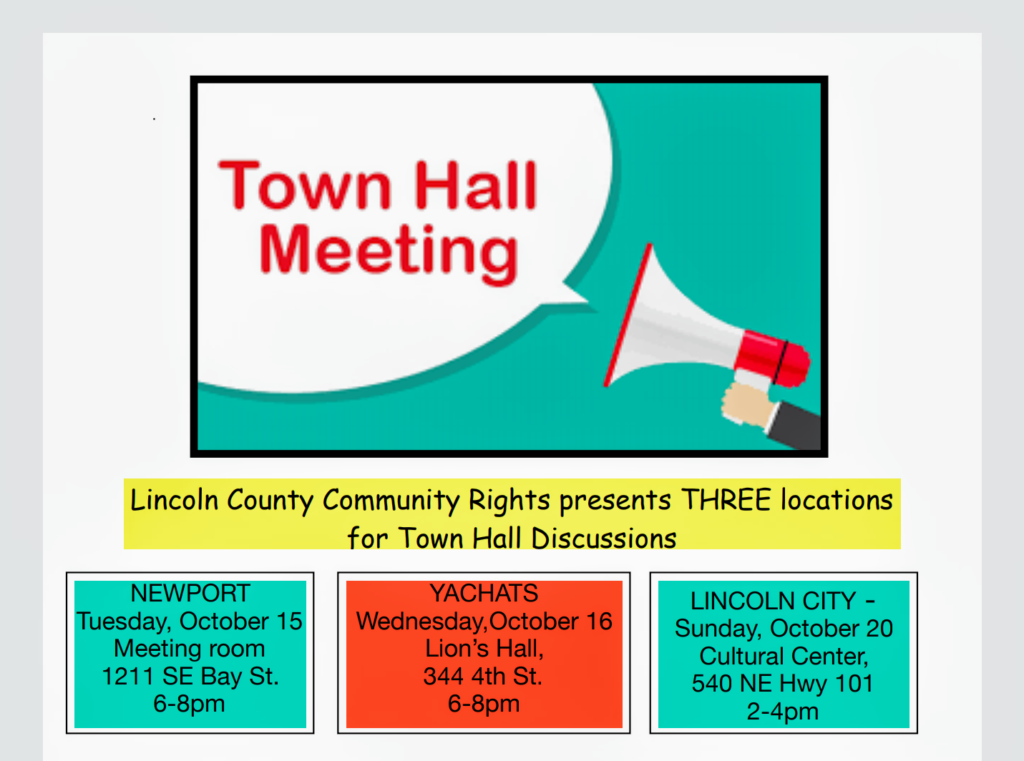 Court rules that state preemption overrides local control; denies the right of local communities to protect their health and safety at a higher standard than the state.

Newport, Oregon: On September 23rd Judge Sheryl Bachart issued her ruling in the case of Rex Capri and Wakefield Farms, LLC vs. Dana W. Jenkins and Lincoln County. After reviewing written arguments and hearing oral arguments on October 9th, 2017, the judge made the determination that Measure 21-177 is invalid based on state law regulating pesticide use.

Affirming the claims of the plaintiffs means the law known as Measure 21-177, enacted by the voters of Lincoln County in 2017 to prohibit aerial spraying of pesticides, has been overturned.

“The fight for our legal, constitutional, and fundamental right of local self-government marches on, and it is going to take the political will of the people to make it a reality if we ever want to stop living under the thumb of corporate government.” said Rio Davidson, President of Lincoln County Community Rights.

Lincoln County Community Rights (LCCR) was allowed to intervene in (join) the case. The Siletz River watershed ecosystem, represented by Lincoln County resident Carol Van Strum, also filed to be part of the case, but was denied intervention by Judge Bachart.

In her judgment decision, Judge Bachart said that Measure 21-177 is an adoption of an Ordinance regarding pesticide use and is therefore subject to the preemptive effect of the Oregon Pesticide Act, which prohibits local governments from making any ordinance, rule or regulation governing pesticide sale or use. She therefore overturned the measure. She based the decision squarely on state preemption laws dealing with pesticide use, whereby the state holds authority over local governments.

What the judge did not substantively consider was the issue of the right of local self-government and how it must prevail against state preemption when exercised to protect health, safety, and welfare. LCCR submitted the following argument with which the court could have ruled in favor of the people and county government:

It is widely recognized that, under the Ninth Amendment to the U.S. Constitution, states have the authority to recognize and secure “unenumerated” rights (rights not expressly stated in the Constitution), and thereby to establish greater rights at the state level than the protections provided under federal law. Likewise, between state and local levels of government, Article I,

Section 33 of the Oregon Constitution– which closely mirrors the Ninth Amendment – recognizes the same limitation on the state’s general powers to violate the “unenumerated” rights of the sovereign people at the local level. Within this body of “unenumerated” rights, and together with Article I, Section 1 of the Oregon Constitution, lies the people’s natural, inherent and unchallengeable right of local community self-government. Exercising this fundamental right, the people may recognize and secure expanded local rights and prohibitions that surpass current state protections. By the same token, the State cannot pass laws that hinder or prohibit the exercise of the people’s right of local community self-government. Said another way, state preemptive laws – when applied to set a “ceiling” (maximum protection allowed) rather than a “floor” (minimum protection required) for local rights-based lawmaking – violate a fundamental right in both the U.S. and Oregon constitutions. As such, current state preemptive laws – like those cited by Plaintiffs – violate the right of local community self-government, and thus cannot operate to overturn the Ordinance at issue.

“We look forward to pursuing the rights to local community self-government in the appellate courts of Oregon”, said Dan Meek, attorney for Lincoln County Community Rights.

At the time of this press release it is not known if the County will appeal the decision. Appeals will be filed by Lincoln County Community Rights and by the Siletz River Watershed, which was denied the opportunity to take part in the court proceeding.

Lincoln County Community Rights is a public benefit organization that seeks to educate and empower people to exercise their right of local community self-government in matters that pertain to their fundamental rights, their natural environment, their quality of life, their health and their safety. Given the harms that people and ecosystems suffer from the practice of aerial spraying of industrial forest land with pesticides, the group drafted an ordinance to ban aerial pesticide spraying in Lincoln County, Oregon. Measure 21-177 was adopted by voters in May 2017, making Lincoln County the first county in the United States to ban aerial pesticide spraying through the vote of the people. www.lincolncountycommunityrights.org

For The full text of the Summary Judgment on 21-177 please click link below.

Here is the Press release from the Community Environmental Defense Fund

LINCOLN COUNTY, OR: In May 2017, Lincoln County, Oregon, voters adopted the Freedom from Aerial Sprayed Pesticides ordinance. The first-in-the-state law recognizes residents’ rights to clean air, water, and soil, their right to local community self-governance, and the Rights of Nature to exist, flourish, and evolve.

Soon after, timber industry interests sued the county to overturn the ordinance, arguing the county had no authority to pass it and that the law “adversely affected” them.

The law stood for over two years, successfully preventing the aerial application of pesticides—a toxic but common practice of the local timber industry.

On September 23, county circuit court Judge Sheryl Bachart upheld an existing dogma that limits the powers of local governments to those the state permits. The judge ruled that the pesticide ban exceeded the authority of Lincoln County because the Oregon Pesticide Control Act disallows local pesticide ordinances, rules, and regulations.

“Oregon does not recognize an independent right of local community self-government that is fundamental, inherent, inalienable, and constitutional.”

“In a choice between unconstitutional state law that protects corporate profits over the health and safety of communities, the judge chose to protect corporate profits,” said Rio Davidson of Lincoln County Community Rights, the group behind the initiative.

Petitioners are seeking state constitutional change to establish a right to self-government that empowers local communities to expand the state’s protections for civil, human and ecosystem rights—as the Lincoln County Freedom from Aerial Sprayed Pesticides seeks to do.

“Though this decision will be appealed on the grounds of denying the exercise of the right of local self-government, it also serves as positive energy to move the amendment forward so ultimately people, not corporations, decide the fate of their communities,” said Nancy Ward, coordinator for the Oregon Community Rights Network.

The Community Environmental Legal Defense Fund (CELDF) assisted Lincoln County Community Rights in drafting the law and representing them as an intervenor in the case. CELDF also sought to represent the Siletz River watershed’s interests in the case. The judge denied intervention.

Appeals will be filed by Lincoln County Community Rights and the Siletz River watershed. At the time of this press release it is not known if Lincoln County will appeal the decision.

The Community Environmental Legal Defense Fund (CELDF) is building a movement for Community Rights and the Rights of Nature to advance democratic, economic, social, and environmental rights –building upward from the grassroots to the state, federal, and international level.